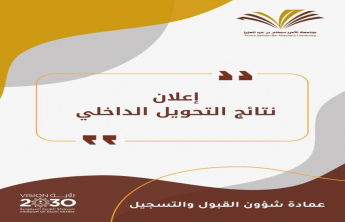 The Deanship of Admission and Registration announces the approval of the names of male and female students whose had internally transferred from one college to another and from one major to another within the university has been accepted for the second semester of the academic year 1443 AH.

On the other hand, the Dean of Admission and Registration Affairs, Dr. Abdulaziz bin Muhammad Al-Sager, confirmed that the approval of transfer requests was made based on the highest rates for the number of seats available and approved by the college councils.

Accordingly, students can enter the Academic Services Portal to see the result of the transfer through the specialization transfer request service and then choose to show transfer requests between colleges and departments.

Note that the status of the transfer request is as follows:

(approved by the new college) i.e. an application has been approved.

(Not acceptable) The transfer request was not approved because the conditions were not met or the seats approved for each section had run out.

The lowest internal transfer rates between faculties and specializations of the university for the second semester of the year 1443 AH are presented in the following table.